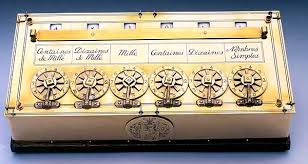 Update 05.2022: the VM/CMS compiler release 2022.04 is now available; see below. It contains support for READSTR and WRITESTR (like in Pascal/VS) for the first time. Enjoy !

The MVS or z/OS variant of the compiler (Hercules or "real" IBM mainframe) is still at 2020.12; this will be corrected in the near future.

Many thanks to Jay Moseley for checking out the MVS version of the compiler and providing instructions
and download files in TAR format on his Hercules related web site: New Stanford PASCAL Compiler - Hercules Compilers (Jay Moseley) 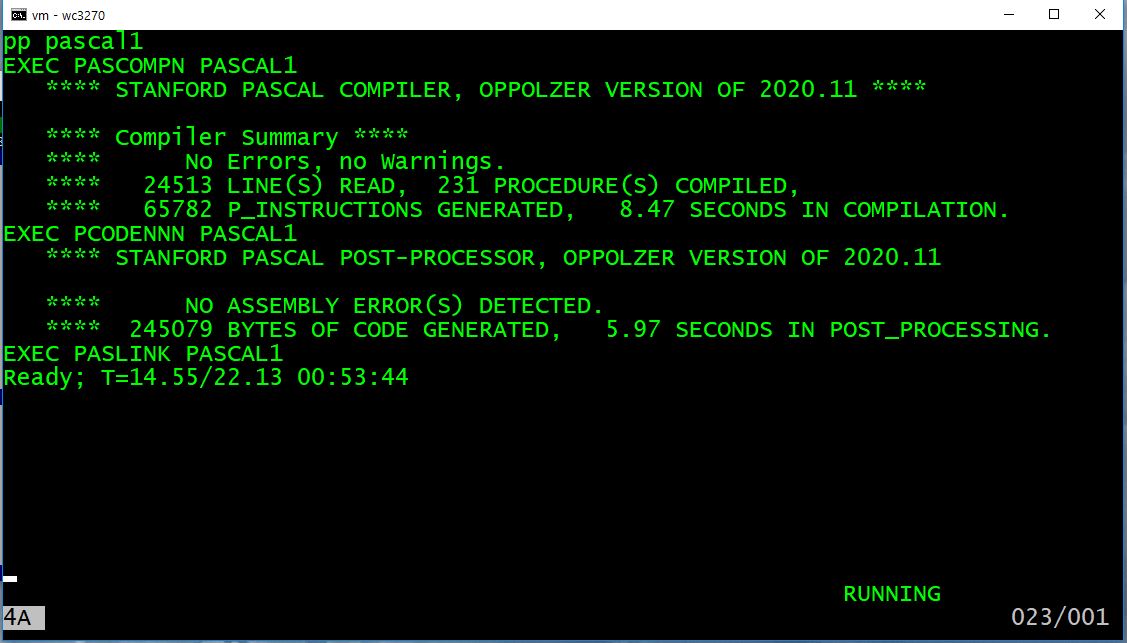 To propagate the language rapidly, a compiler "porting kit" was created in Zürich that included a compiler that generated code for a "virtual" stack machine,
i.e., code that lends itself to reasonably efficient interpretation, along with an interpreter for that code - the Pascal-P system.
The P-system compilers were termed Pascal-P1, Pascal-P2, Pascal-P3, and Pascal-P4.
Pascal-P1 was the first version, and Pascal-P4 was the last to come from Zürich.

A compiler based on the Pascal-P4 compiler, which created native binaries, was released for the IBM System/370 mainframe computer
by the Australian Atomic Energy Commission; it was called the "AAEC Pascal Compiler" after the abbreviation of the name of the Commission.

As I learned recently from Mark Waterbury, this is not correct. The AAEC compiler is an independent development and is not based on the P4 compiler. Mark gave me the sources, and I compared them to the original Stanford compiler, which is a P4 variant, and there are many differences. It is very unlikely if not impossible that the AAEC compiler builders had access to the P4 source.

The true story is: starting from the P4 compiler from Zürich, some work has been done in Bombay (India), and then the Stanford compiler was based on that work. The P4 compiler produces P-Code, which is independent of the target machine; to be able to run on the IBM mainframe, the P-Code needs to be translated to 370 machine code. I don't know exactly when the P-Code-to-370 translator was written; the first comment is by S. Hazeghi of Stanford. So maybe the customization of the P4 compiler to the IBM mainframe was done at Stanford; this must have been in the second half of the 1970s. The P4 compiler targetted to the IBM mainframe was then called the Stanford Pascal Compiler and was used heavily during the late 1970s and early 1980s.

Mark also told me that the Stanford compiler probably was used to bootstrap the Pascal/VS compiler from IBM, which is a self-compiling compiler (like Stanford). Pascal/VS internally uses some sort of extended P-Code, which is an extension of the P4 P-Code. BTW: the UCSD Pascal system used an intermediate code called U-Code, which is based on P4's P-Code, too.

Some years later (1982 ca.), the Stanford compiler was transferred to the McGill university in Montreal, Canada and used on their MUSIC/SP mainframe operating system. That's where I found it in 2011. The McGill version of the compiler (still called Stanford Pascal) had several significant extensions, compared to the original Stanford version of 1979.

The Stanford compiler was originally targetted to IBM mainframes only.
Today it runs on VM/370 Rel.6 and on MVS 3.8j on the Hercules emulator.
And it runs on today's z/OS, too (tested first by Rene Jansen in 05.2017, thanks!).
It will sure run on modern zVM, too (at the moment limited to AMODE 24, RMODE 24).
The VM and MVS versions can be downloaded from this site (including source codes), see "Resources" below.

It also runs (tested) on Windows, OS/2, Linux (x86) and Mac OS, because I ported it there in the end of 2016.
On these platforms the P-Code generated by the first compiler pass is interpreted by a P-Code interpreter written in ANSI-C,
so it will probably run on every platform that has a C compiler. Please contact me, if you want to test it on other platforms.
The Windows (and OS/2) version is available from this site, too; see "Resources" below.

This picture shows the Pascal compiler compiling itself on Windows
(only pass 1 needed, Pascal to P-Code; the P-Code is interpreted by the P-Code interpreter PCINT).

Evolution steps so far (will be continued ...)

Topics with this icon

are not yet completed ... maybe implemented, but documentation is missing.

My own Pascal history (please forgive me, this is in German)
Porting the Stanford compiler from MUSIC/SP to VM on Hercules
First extensions to the compiler in 2011
New keywords BREAK, CONTINUE, RETURN - still in 2011

The whole story on one large page

All on one page

I will no longer post the sources here explicitly, because they are on GitHub anyway (see link below), and keeping them current here is a lot of work which can be saved.

Furthermore, I would like to add that the versions on GitHub are always the best and newest and the mainframe versions for VM/CMS and MVS can be one or two released behind. I hope you don't mind.

Since 2016 ca., when I first ported the compiler to Windows, the new versions and the enhancements are first implemented and tested on Windows and then (later) on the mainframe.


PAS2022A_COMP.AWS - this tape contains the needed files to run the compiler
PAS2022A.AWS - this is a TAPE DUMP of the complete development disk, including test programs etc.

ZIP File containing the Pascal system for MVS - or z/OS


Usage Notes for the MVS version:

the ZIP file contains an "Installation Guide" PDF, where you can find detailed instructions. You can also find it here.

The non-Mainframe versions of New Stanford Pascal are based on the P-Code interpreter PCINT.

The most recent version is available at GitHub:


Installation steps for the Windows and OS/2 version:

a) Download the Compiler ZIP File from GitHub and unpack it into a directory of your choice b) if you're on Windows, you can use the PCINT.EXE which is in the bin subdirectory. Otherwise (if you are using OS/2 or MacOS or Unix), you will have to compile PCINT using the sources which are in the bin subdir, too. c) Now you should choose a directory, where the executables of the compiler should be stored; this directory should be part of your PATH (for example: C:\bin ... or another directory of your choice). d) Please copy the file COPYBIN.CMD from the script subdir to the install directory (one level up) e) edit the SET command in COPYBIN.CMD (at the beginning) which sets the environment variable PASDIR to the directory for the executables of your choice (see step c)) f) and now start COPYBIN.CMD, so that the needed files are placed into the PASDIR directory

Now the compiler commands should work from everywhere. Just make sure that the environment variable PASDIR always contains the directory where the compiler is (as chosen in step c)), because it is referenced in the compiler script files.

For other (Non-Windows) systems:

PCINT can IMHO be compiled with every standard C compiler; I used IBM's C compiler on OS/2 and the Open Watcom C compiler on Windows (and gcc on Linux, BTW).

The CMD files for Windows (and the installation method described above) will work for OS/2, too. If you are on another system, you will have to adjust the script files; maybe you find some ideas in the subdirectory script_ix. Otherwise, you can contact me directly.


Back to main page